Damon Arashi is the main protagonist of Storm's Brewing, and the story is told from his perspective.

Damon is approximately 5'1" tall, and both his hair and eyes are dark brown. He wears a generic orange zip-up jacket with no hood, and the usual shirt he wears is aqua blue. He rounds out the outfit with solid-color shorts and a pair of Tricera-themed shoes. He later obtains a canvas belt on which he holds his current team's Dino Medals.

Damon hails from the same place as Dino, Dina, and Todd, along with his childhood friend Bob. He and Bob make entries into the Caliosteo Cup alongside Dina and Todd.

As a child he used to stay in a vacation home along the shores of a lake. He spent lots of time with his Elasmo, forming their strong bond over the years. His time spent at the lake and his friendship with Elasmo caused his love for Water Vivosaurs, which he holds until this day.

Items that have a specific customization or use to them. Standard items or those given out by Cup management are not included in this list.

Thea - While initially standoffish, Thea and Damon formed their friendship through video games; however, while Damon tends to be more of a casual fan with some form of ability, Thea is much more competitive, and hones her skills. They have been known, however, to have disagreements.

Primacron - One of Damon's roommates, and also a very good friend. Although he is merely a few years older, Primacron often acts as a guiding or consoling figure for Thea and Damon, and does keep tabs on them.

Lucille - Lucille is very close to Damon, often sharing her various snacks she sells with him. He wonders what she's saving up for.

Rubicon - After facing Rubicon in Round One, Damon has made attempts to get to know him better,

Bob - Damon and Bob grew up in the same town. While they didn't really get acquainted until around fifth grade, Damon acts as a more reliable companion in Bob's plans.

Tim - Known to Damon only as an acquaintance of Alistair.

Celestial - Damon's first impression on Celestial, had she been any other person, would have lead to animosity, but Celestial's nature forgave him. They have since talked a few times, mostly through the online chat room,

Ub - Seen once outside the Ribular Fighter Station. Hasn't been seen since.

Deltri - He and Damon have only had a brief encounter, where Damon almost shot Deltri with an non-sharpened arrow.

Ray - Damon's sentiments towards Ray are very negative, due partially to Alistair's influence and partially from personal experience, when Ray knocked him out with a Perplex Shot to the head. After aligning himself with Alistair, Damon again encounters the leader of the Breakaway Brigade, this time fully set against him.

Alistair - This mysterious fighter stuns Damon with his cold, glaring silver eyes. He later forms a pact to help take down Ray.

Nathan - Despite being Thea's boyfriend, Damon has only briefly interacted with him. Damon does have concerns for certain parts of him though, particularly his wallet.

Azalea First meeting Azalea in the online chat, he later encounters her at the Fossil Guild. Her Tsintao intrigues him.

Justyn - Finding Justyn lurking around Rainbow Canyon during his search for the Mammoth Vision, Damon immediatly gets suspicious, prompting an attack by Justyn's U-Raptor. He saw Justyn recover from a fall from a cliff, and reported his suspicions to Staff management. 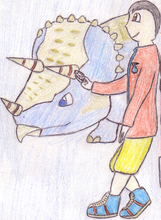 Retrieved from "https://fossilfightersfanfic.fandom.com/wiki/Damon?oldid=7665"
Community content is available under CC-BY-SA unless otherwise noted.